As a half Japanese, half Danish female digital product designer, it pains me to still have to talk about this. Seventy eight per cent of the UK’s design workforce is male. Look at specific industries and the stats get worse: 80% male in digital design, 85% male in architecture, and a staggering 95% in product design. Those are some appalling numbers – especially when you consider that the majority of people studying design at university are women. So where are they all going? How are the smaller groups of men still taking the lion’s share of roles in the industry? 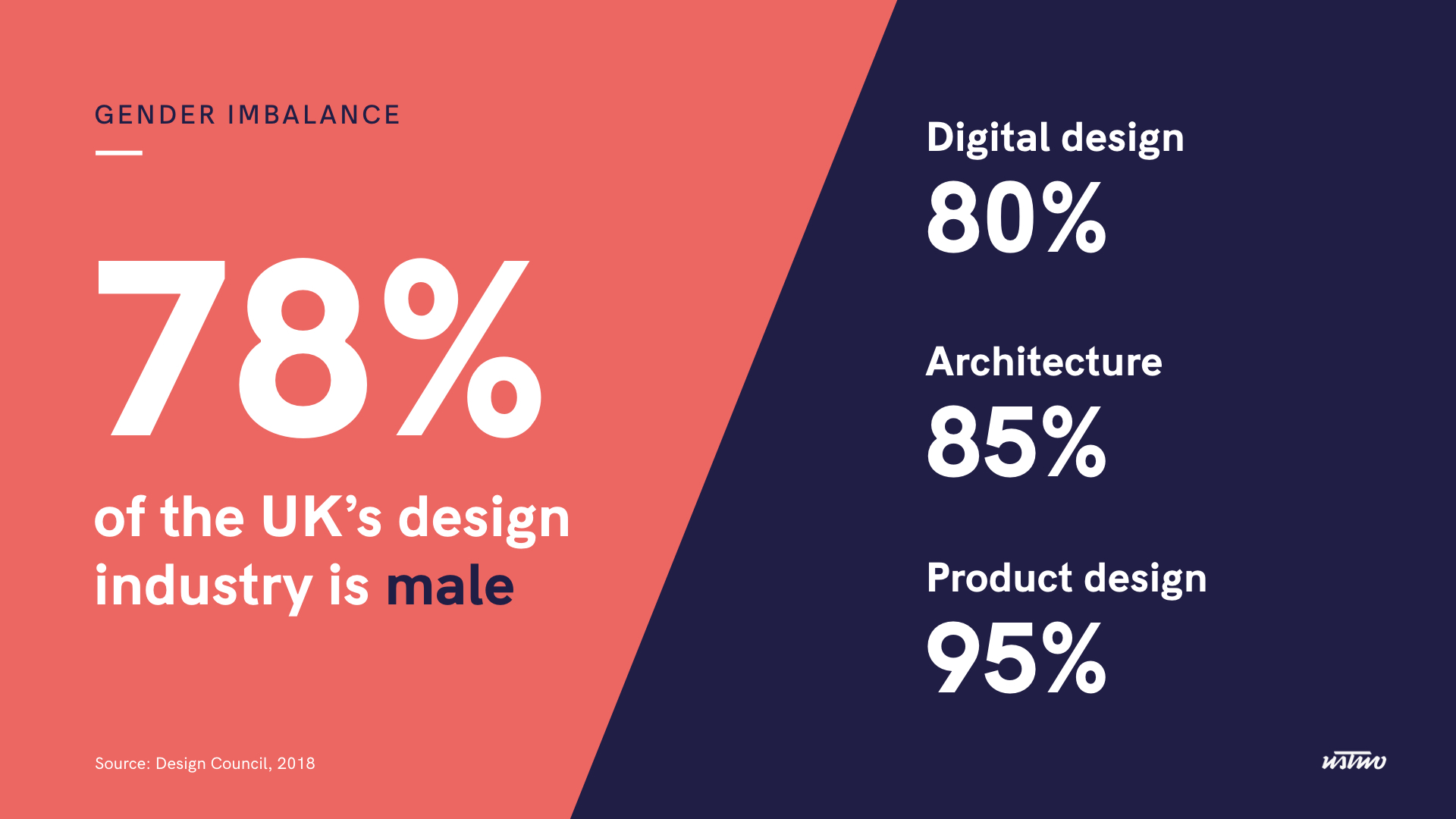 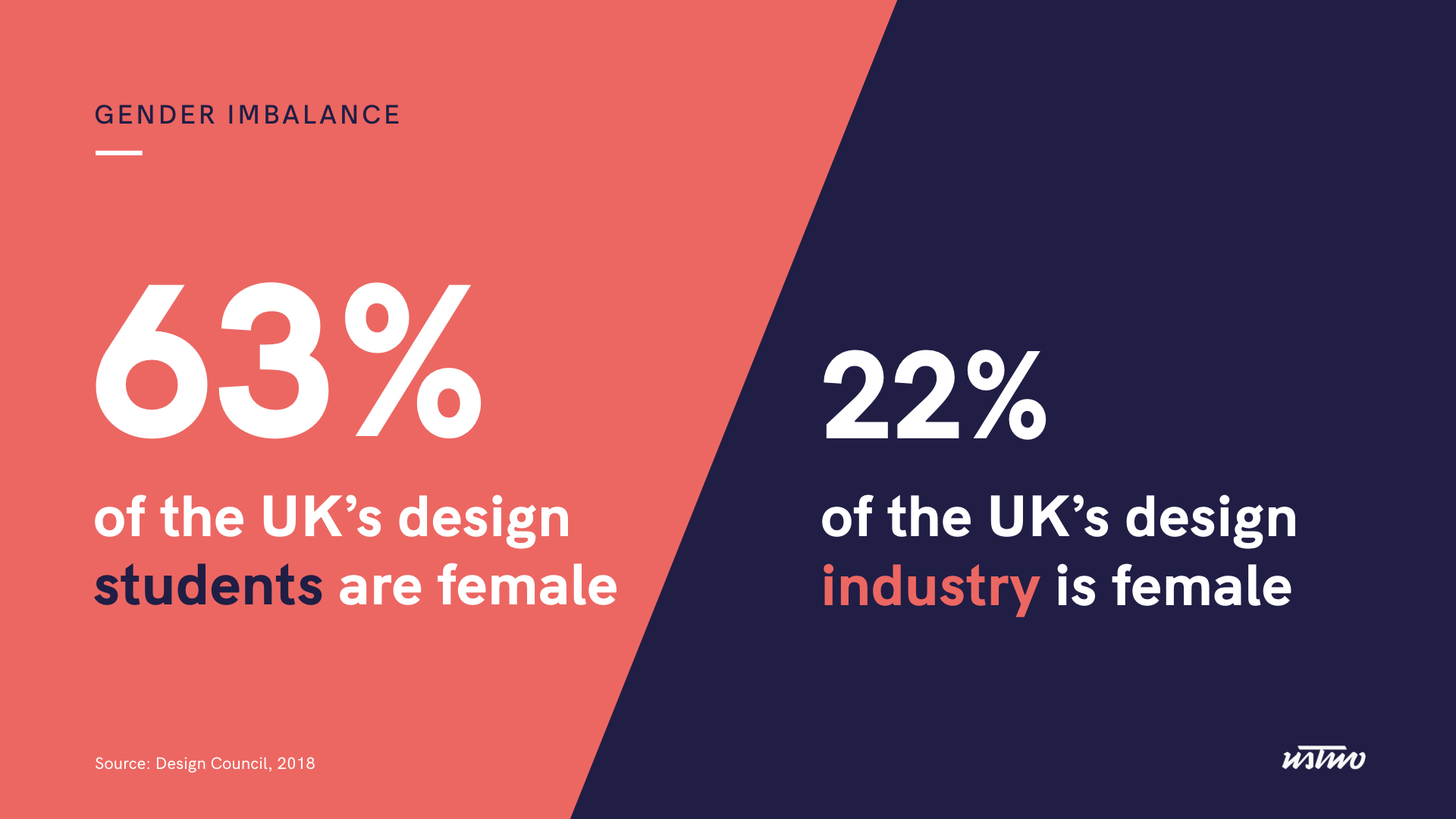 Gender diversity is just one of the myriad factors that play into diversity. While there is more and more emphasis on ethnic diversity, the statistics for things like gender identification, sexual orientation, religion, disability, or socio-economic background are difficult to find, because they’re not routinely researched. The first time that the Institute of Practitioners in Advertising census even asked ad agencies about disability was in 2018.

Why does this matter?

At ustwo, we worked with a car company to investigate the future of interactive car dashboards. The client was Chinese, and our team included people from India, Ireland, and Japan – it sounds like the opening line of a bad joke, but the variety of perspectives coming together meant the team could make new connections between driving behaviours in different countries. 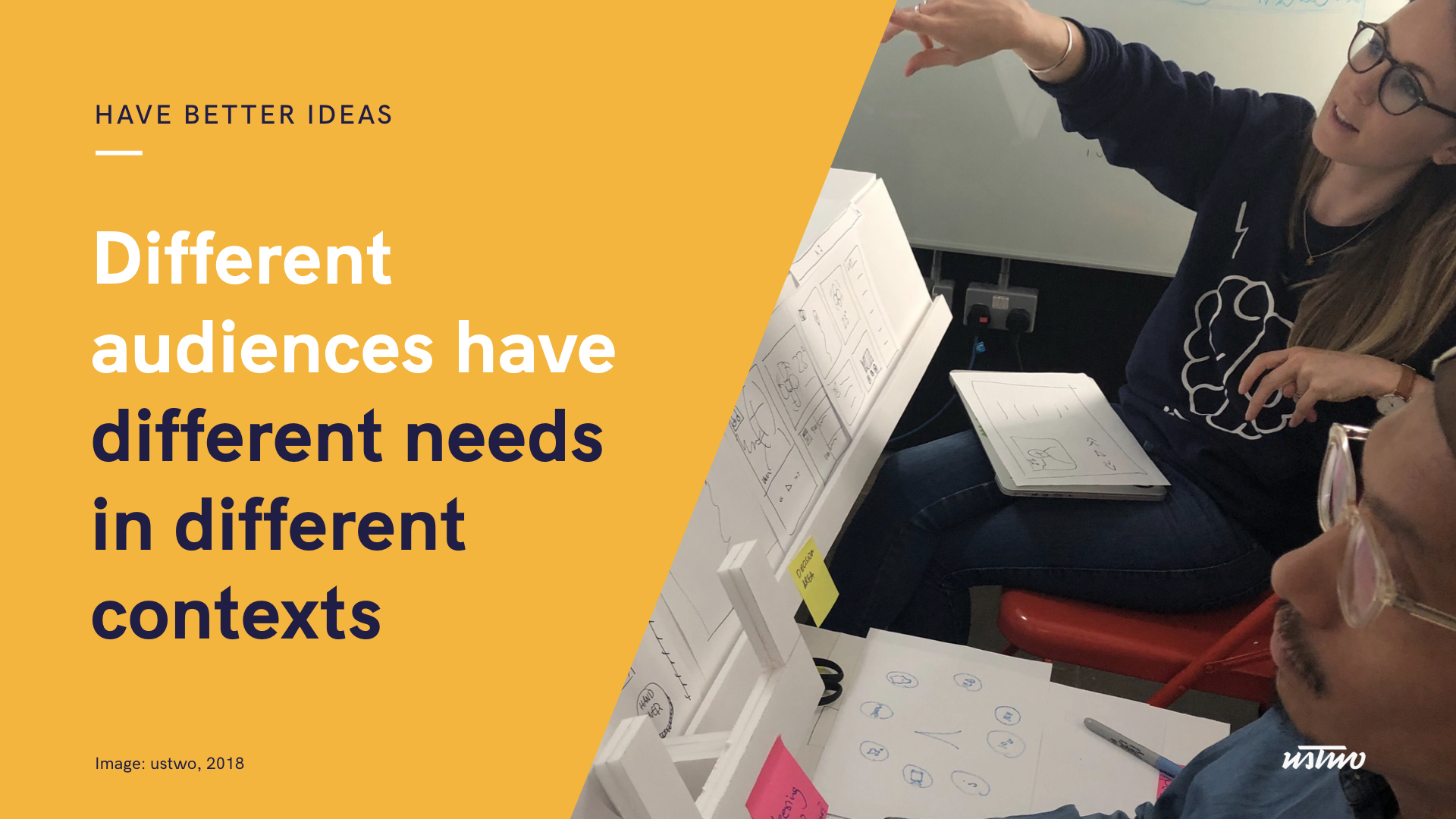 Earlier on in my career, I worked for the housing charity Centrepoint to create a online peer support platform for young homeless people. But in the early stages, we struggled to capture our audience. It was no use for us to tell young people that this new product was going to help them. They weren’t going to listen to us – what did we know about being 17 and sleeping rough?

It wasn’t until we got brought young people of that background directly onto the team to help design and promote the platform that we started to see traction. Having the right representation enabled us to resonate with our target audience. Projects like The Girl Effect are another great example of this idea.

But the landscape looks bleak, and lack of representation in the industry is a self-perpetuating cycle. For the last few months, students at Goldsmiths have been staging an occupation to protest the implicit racism they face in academia every day which prevents certain groups from succeeding as well as others. 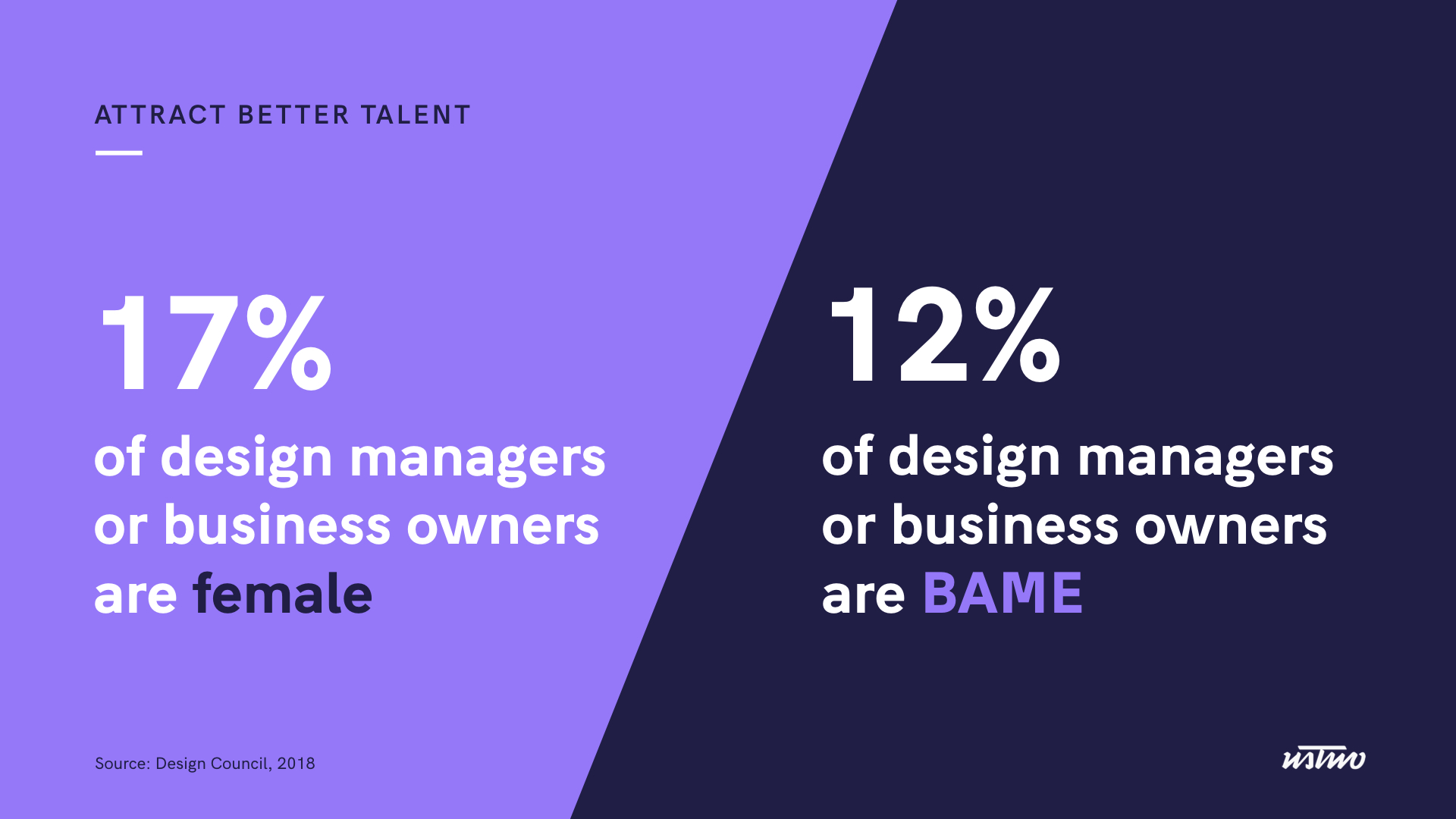 Just 17% of design managers or business owners are female - and they still earn less than men in the same roles. Meanwhile Black, Asian and Minority Ethnic groups make up just 12% of senior roles in design.

If people don’t clearly see roles models of success that they can relate to, they will continue to give up in the early stages of their career, perpetuating the pattern.

As the Design Council put it: ‘The continuing importance of design to the UK economy is clear…. But for the UK to grasp this opportunity, access to design and skills must be more evenly distributed across firms, regions and people.’

McKinsey found that gender diverse companies are 21% more likely to outperform their competitors – racially diverse teams even more so, at 33%. I don’t think I need to make any lengthy arguments about why that’s a good thing. 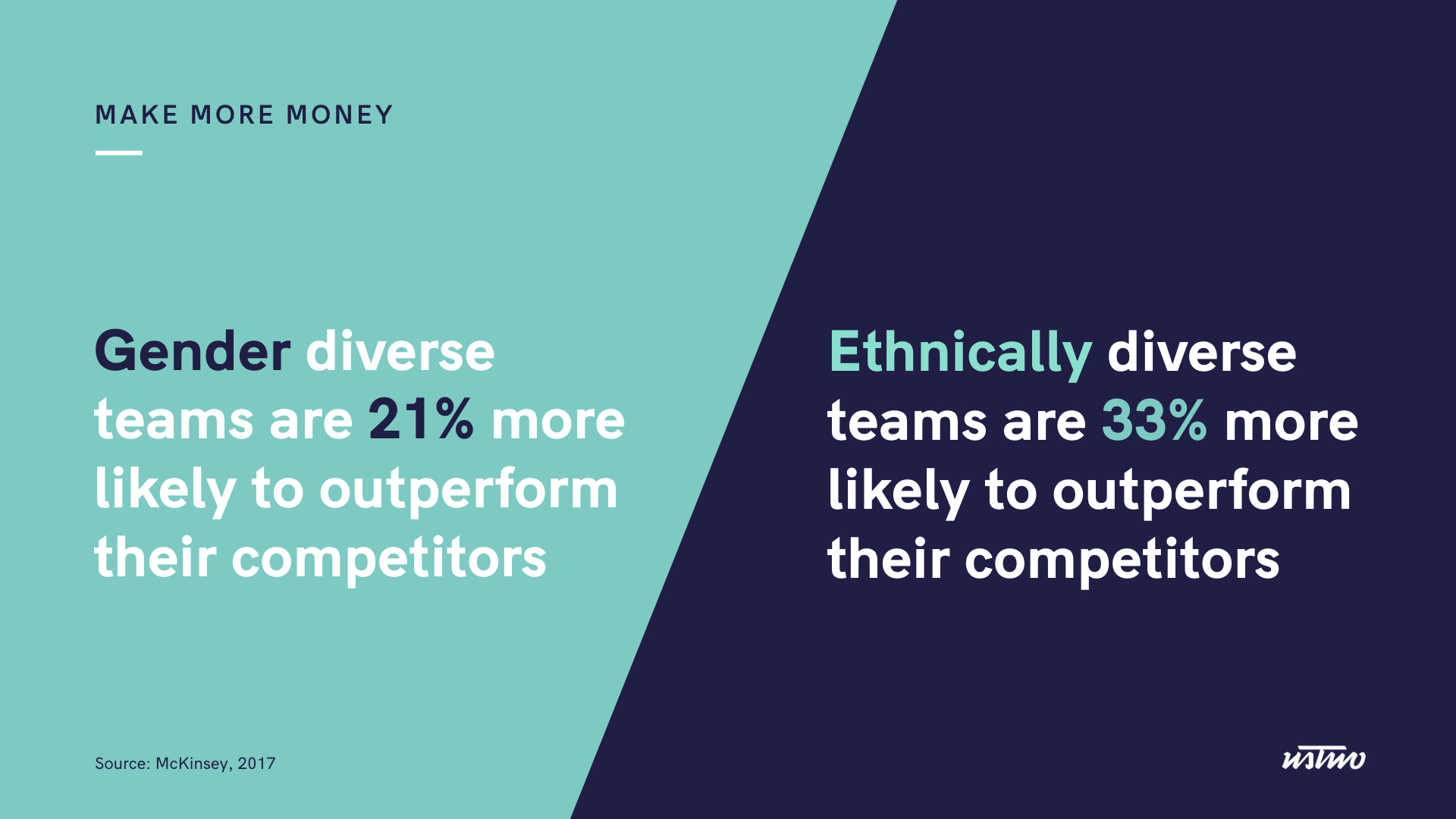 So what can you do?

If you are a decision maker at your company, put your money where your mouth is. Implement diversity bias training or a policy that prioritises working with other agencies that also have diverse teams. Adjust your hiring process. Actively seek to fill your diversity gaps. Look outside of your usual sources, and stop relying on nepotism - the bane of recruitment in the creative sector.

There are a wealth of organisations in this space that everyone can support – Pip Jamieson from The Dots has put together a great list here. Ustwo is a founding member of Flipside and has also taken part in the Creative Mentor Network - both are initiatives that support young people with limited social capital. Open your doors and infiltrate universities – offer your time to mentor students or bring them in for internships, and give them back hope that they can make it in this industry.

It takes hard work and care from everyone (not just HR!) and sometimes it can get uncomfortable. We’ve come a long way at Ustwo, and we proudly have an equal gender split and a wonderfully diverse leadership team. But there is still work to do, and we prioritise it not because it looks good or it ticks boxes, but because it is good – everyone benefits. 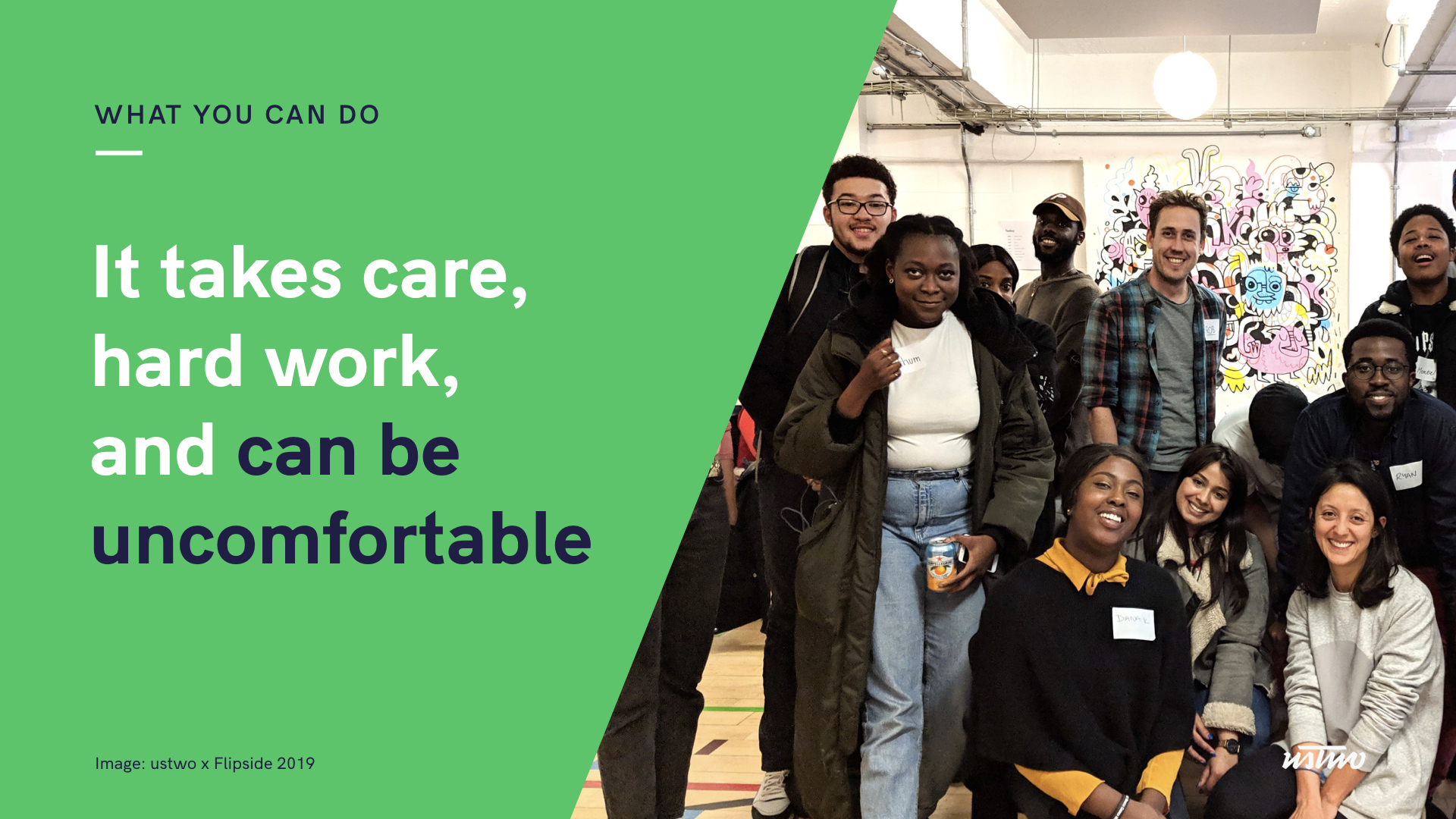 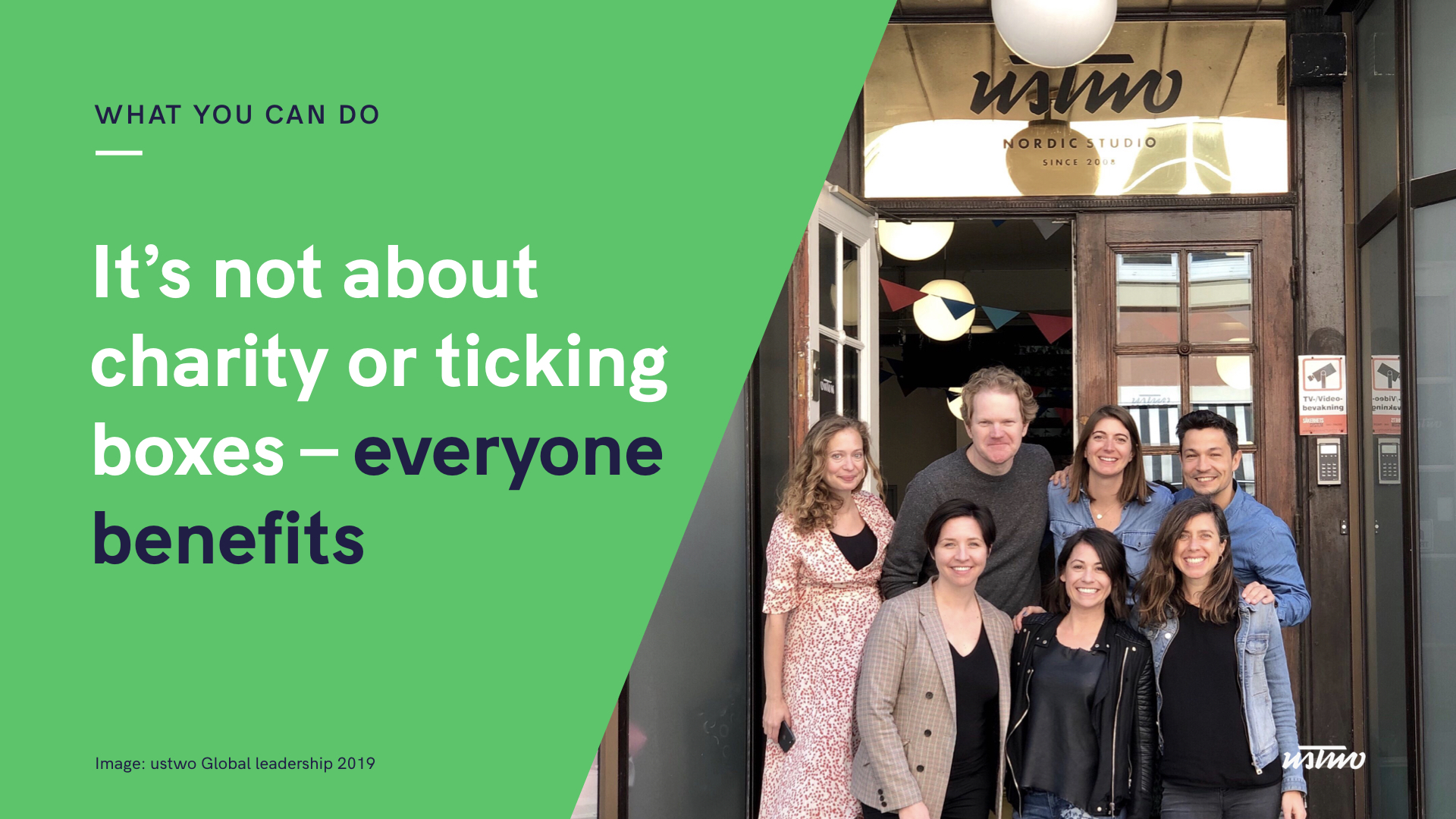 This article was originally produced for Contagious, and was a part of a series of talks held at the Contagious Live Bootcamp

Marisa is product designer at ustwo London, working across the spectrum of digital design from discovery to build. She has a special interest in health tech, and has most recently been working on a number of platforms aimed at treating chronic kidney disease for both patients and doctors. Her other special interests include plants, outdoor activities and matching colours.

Are you keen on making a meaningful impact? Interested in joining the ustwo team?

Get in touch to discuss what we could do for you.

ustwo is a B certified company.